I didn't even mention Leonardo DiCaprio's performance in my review of Martin Scorsese's Shutter Island. I usually don't like to dwell on performances because a) by the time I see them, the actor/actress in question has already won 15 different critics awards and it's terribly old news and b) directorial ticks and expressions have always been more interesting to me. 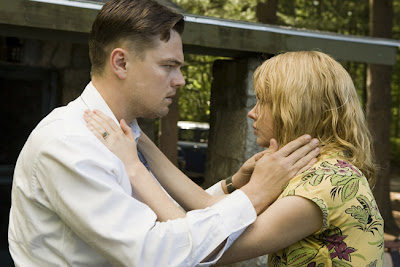 First off, nobody is better at giving off a sense of delusion, confusion or moral turbulence better than DiCaprio, and I don't know any better way to describe the character of Teddy Daniels than as confused or delusional.

And while his squinty-eyed, sour-lemon face is now his go-to breakdown trump card, I think the "revelation" scene at the end of the film is heartbreaking stuff, and on a second viewing, you really notice some devastating facial gestures in his shakedown with Ben Kingsley.

And like the performance, the film as a whole just won't escape my mind. Its portrait of psychological fragility - the difference between man and monster - ringing more and more clearly with each passing moment. I think the more you see it, the more you think about it and the more you digest it, it becomes less and less of the manipulating, peek-a-boo genre trope that so many have denounced it as and more of a really challenging, thoughtful work.
Posted by Chase Kahn at 5:58 PM