After the critical and financial success of Pee-Wee's Big Adventure, Burton began working on a script with Sam Hamm for a little project called Batman. But Warner Bros. was only willing to go so far and had yet to greenlight the film's production until the script was finished.

So in limbo, Burton decided to shoot a modestly-budgeted film ($13 million) from an original script by Michael McDowell about a married couple who struggle to deal with the realities of their deaths and the petulant, estranged family who move into their home. 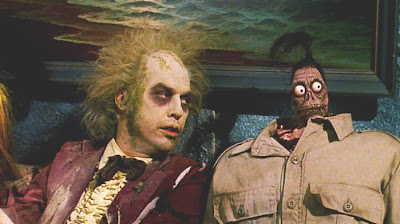 Beetlejuice is essentially Burton's fun-house of horrors and the beginning of the director's fascination with the supernatural, the superhuman and the chimerical. He was perhaps never as kooky, unchained or low-rent and macabre as he was here, and thus the film has a sizeable following and a place in the heart of many.

In essence a ceaseless barrage of stop-motion effects and unfathomable creature designs, it also strongly represents Burton's visual and thematic sensibilities in regards to character alienation and design. It also marks the first great score by Danny Elfman, who is almost as synonymous with the director as his frequent on-screen collaborators, Johnny Depp and his own corpse bride, Helena Bonham Carter.

Additionally, it sets the groundwork for Michael Keaton and Winona Ryder to land roles in Burton's future films, Batman and Edward Scissorhands. Both are simply a joy to watch here - with the latter assuming Burton's fetishistic approach to hairstyling.

Now, Michael McDowell's original script (before going through various rewrites) was apparently far more violent and stern and less of a haunted house. For example, when Adam (Alec Baldwin) and Barbara (Geena Davis) Maitland drive off of a bride to their deaths, McDowell's script originally provided a very descriptive and real account of the tragedy - in Burton's film, in which a dog is the culprit, the scene is almost comical. 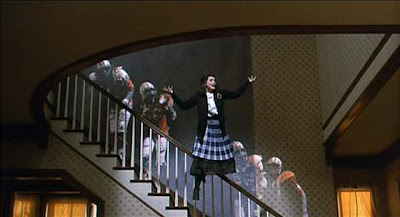 And thus, Beetlejuice took on this farcical, tongue-in-cheek, absurdist sense of humor that would dominate the filmography of Burton for the rest of his career - mixing the ghastly and the ghoulish with fun, almost flippant irony.

But where Beetlejuice feels artistically schlocky in the best Sam Raimi kind of way, it has a strange and unfortunate penchant for over-stepping its boundaries. When a dinner table Harry Belafonte sing-a-long breaks out, it's kinda funny, but when Winona Ryder closes the film by apathetically signing and dancing to "Jump in the Line (Shake, Senora)," well that's just a little more than I can stand.
Posted by Chase Kahn at 8:48 PM