Clash of the Dimensions 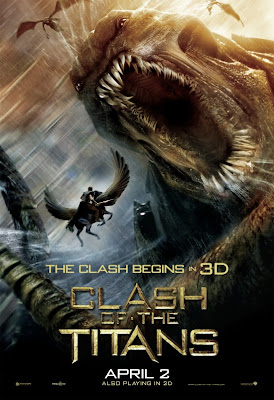 The move by Warner Bros. to "demensionalize" Louis Letterier's Clash of the Titans and thus push it back a week, is nothing if not completely desperate. Obviously, it's a direct response to the boffo box-office performance of Avatar, which kicked Sherlock Holmes and The Book of Eli around all winter.

My stance on 3D has always been to use it on certain films in which the viewing experience is enhanced, (i.e. building it from the ground up.) Avatar, despite my reservations for the film itself, implemented the technology beautifully - at times, seamlessly.

But studios throwing out 3D just to do it and doing it just to beef up their returns by preying on uninformed theater-goers expecting something like Avatar is sickening. On a much larger scale, the final two chapters of the Harry Potter saga will also go 3D, in an equally desperate move.

I have yet to see a 3D film in theaters that was originally shot to be projected in two-dimensions, but I can't imagine that it's a pretty sight, not to mention worth the extra $2-4.

Clearly there is a market for 3D, but it exists with the Coraline's and Avatar's of the world - an every 1-2 months kind of thing. I'm worried that more studios will adapt like Warner Bros. and revert to equally (or perhaps exceedingly) desperate measures. Let's hope not.

I'll be seeing Clash of the Titans in 2D, thank you, the way it was meant to be seen.
Posted by Chase Kahn at 12:07 PM