I don't much like the musings of New York Observer critic Rex Reed, but his 2.23 review of Kevin Smith's Cop Out, which opens this Friday, is a good temperature check of the kind of critical reactions we're going to see over the next day or so.

Reed's tirades about the state of film criticism and American filmmaking are overly dramatic and banal, but here goes: 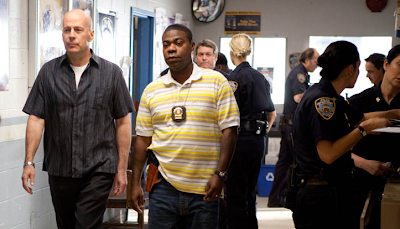 "There isn't much to say about a movie this stupid, involving a duo of aging stoners in uniform who patrol Brookyln and Queens and call themselves White Lighning and Black Thunder, and who spend most of their time on suspension without pay for obvious reasons."

"...at the screening for alleged critics I attended, one lady reviewer old enough to know better went into hysterics every time the cops described in detail their excrement, flatulence and penis size."

"I guess it could be worse. The sleep-inducing Cop Out was originally called A Couple of Dicks, so be grateful for small favors. An even bigger favor would have been burning the negative before it left the lab."

The current tally is at 17% on Rotten Tomatoes, and Armond White isn't even trying to pass it off as some commentary on post-racial America.
Posted by Chase Kahn at 3:57 PM