An ongoing contract dispute between Columbia producer Harry Cohn and Barbara Stanwyck prior to the filming of Frank Capra's next film probably had more intrigue and drama than the end result. 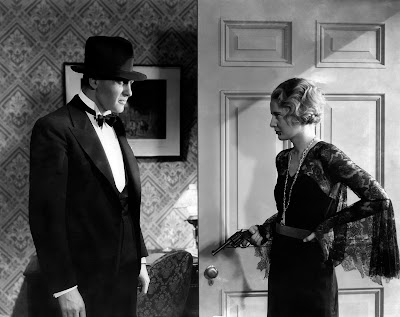 Written by frequent collaborator Jo Swerling and based on a story by Capra himself, Forbidden (1932) is a fatally overwrought and creaky melodrama - soapy and borderline insufferable. It charts the decades long fling between a rich, but married lawyer (Adolphe Menjou) and a librarian (Barbara Stanwyck), and the subsequent disarray over their forbidden romance as the former runs for governor.

It's relentlessly grim and weepy, yet from the first scene, we're sure where this thing is going. Even Stanwyck, who shined brightly in Capra's earlier films Ladies of Leisure and The Miracle Woman, is reduced to a frustrating pushover of a woman, who allows Menjou's Bob Grover to dictate and prioritize her life in the name of love, even though we don't buy it for a second.

She lacks the toughness and vulnerability and playfulness that marks her best performances, and even her minor ones. Forbidden is a career low-point, both for Stanwyck and for Capra, who would later admit and accept its major shortcomings. Needless to say, the two would bounce back just fine.
Posted by Chase Kahn at 4:45 PM