The Sound of The Birds

I caught the last few minutes of Alfred Hitchcock's The Birds (1963) last night on BBC America and was reminded how striking and downright amazing that film is...at times. On the whole, I think it's a tad too bloated and infuriatingly spiked with poor supporting performances, but I wanted to talk a little about what it does so damn well. 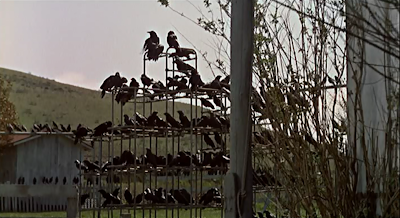 First off, it's a technical masterclass, particularly in its inventive and brilliantly orchestrated sound design. Through a simple combination of natural bird sounds and electronic effects (using an instrument called an electroacoustic Trautonium) and arranged by Bernard Herrman, this soundtrack of abstract noises becomes a strange necessity to the success of the film.
The way that the sounds and shrills of the birds are being used instead of a more traditional orchestral score, and the way that these sounds work in relation to the material (building suspense, sustaining quiet, etc.) make this the most inventive use of sound in a film that I've ever heard. It wouldn't be the same without it.
Additionally, all of the "attack scenes" were shot using a careful and seamless blend of live and animated birds with special effects overseen by Ub Iwerks. The suspense created by Hitchcock in The Birds (which runs 120 minutes and doesn't really start going until a third of the way in) is paramount to the film's effectiveness and thus the believability of the effects becomes just as crucial.
Based on a 1952 short-story by Daphne Du Maurier (and originally intended as a likely metaphor for an aerial invasion by way of Communism or Nazism), The Birds remains so effective in its terror because the threat here comes from such a seemingly docile and innocuous creature. In "Hitchcock/Truffaut," the acclaimed one-on-one interview composed and published in the 70's, Hitch spoke on this idea: "I think if the story had involved vultures, or birds of prey, I might not have wanted it. The basic appeal to me is that it had to do with ordinary, everyday birds."
I like to think of the second half of The Birds in three major stages or scenes: the schoolhouse attack, the gasoline station attack and the final scene/escape at the Brenner home.
This first scene, the attack on the schoolhouse in which Melaine (Tippi Hedren) sits on the schoolyard bench as the crows slowly gather behind her, is one of the greatest examples of suspense you're likely to see. First, the juxtaposition of the children singing "Wee Cooper O'Fife" in the schoolhouse and the slow gathering of the birds on the playground is irony at its best.
Secondly, the way that we hear the sound of the children's feet stomping on the pavement and the subsequent reaction and fluttering of the birds in response is just another example of how the sound in The Birds is used to narrate the film and just how startlingly effective it is. 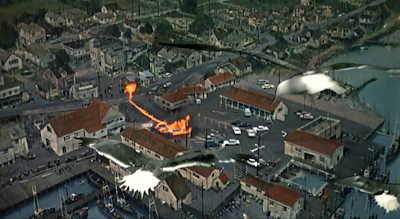 Next is the gas station scene, which contains my second favorite shot in the whole film, the literal birds-eye view of Bodega Bay and their slow descent towards the town. There's also a silly series of shots as Melanie reacts to the gas catching fire and her change in reactions as it moves across the street, one of several such scenes in The Birds. Yet once again, the entire attack is set solely to the sounds of the pesky, winged-creatures - chilling and effective.
The film ends with a violent attack on Melanie (Tippi Hedren) as she wanders upstairs and then as the Brenner family takes her out to the car and drives from the house through an imposing and eerily still crowd of birds. (I've always loved how Rod Taylor turns on the radio to hear a report on multiple attacks in other small California towns. The scope widening and the threat peaking.) 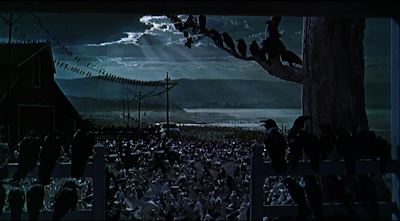 The implication in this final shot is that the birds are becoming stronger and more numerous, with no motivation (scientific or otherwise) implied. It's probably one of the greatest single takes in the history of film in terms of its meaning and its technical difficulty (Hitchcock said it was the hardest shot of his career) and it's just one of the few moments that makes The Birds such an extraordinary achievement.
Posted by Chase Kahn at 1:46 PM