Although a little soggy around the edges, Mervyn LeRoy's Thirty Seconds Over Tokyo ('44) is a wrenching, tense war film about the retaliatory bombing mission on Japan just months after the attack on Pearl Harbor.

Written by the famed Dalton Trumbo (before he was a member of the Hollywood Ten), the film is based on the novel of the same name written by Captain Ted W. Lawson, a real-life pilot who participated in the raid and is portrayed on screen by Van Johnson.

Trumbo's script is a little cluttered with goofy supporting characters and gushy romance, but for the way that it amounts tension through authenticity and for its brave use of flashbacks in the second act, Thirty Seconds Over Tokyo is one of the most uncompromising and revealing films made during the war.

It follows a group of B-25 pilots who volunteer for an undeclared mission to be headed by Lieutenant Colonel Jimmy Doolittle, who is played by a seldom seen Spencer Tracy. Thankfully for this reviewer, Thirty Seconds Over Tokyo isn't another air-combat film about authoritative leadership and the relationships between pilots and officers, instead choosing to focus on the details of the mission and the crew of one bomber in particular. 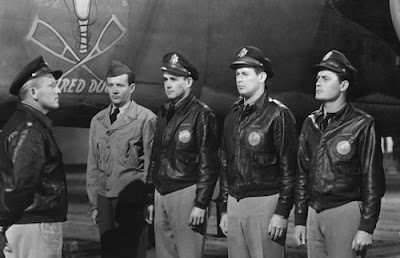 The aforementioned Van Johnson plays Ted W. Lawson (the real-life writer of the novel) who pilots "The Ruptured Duck," a five-man B-25 that participated in the raid on Tokyo before landing in Chongqing, China. The great Robert Walker and Robert Mitchum round out a strong supporting cast, with Phyllis Thaxter playing Lawson's wife.

By focusing on just "The Ruptured Duck," the film creates a sensational feeling of anxiety and isolation as we're with them every step of the way, from the tricky take-off to the crash-landing. Thirty Seconds Over Tokyo is one of the first air-combat films I've seen that bothers to cover the anatomy of a bombing mission - the delegations of the crew, the exposedness of the air and the helpless visibility of the landing.

As Lawson and his crew attempt to get back to the States, the film certainly knows how to tug all too forcefully at the heartstrings. A series of flashbacks from Lawson's point-of-view and a Chinese rendering of "The National Anthem" provide enough bait for sensitive audiences, but LeRoy and Trumbo just don't let up.

It's a great film if you like your war with a side of syrup, but even so, this rigid and distressing aerial attack has enough to win over even the most cynical viewer. [B+]
Posted by Chase Kahn at 9:50 AM