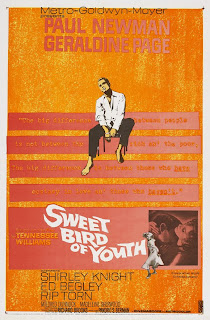 An adaptation of the Tennessee Williams play, Richards Brooks' Sweet Bird of Youth ('62), like The Cat on a Hot Tin Roof ('58) before it, ran into some problematic production-code speedbumps in translation to the big screen yet still pulsates with that sweaty, oppressive inclination.

An essential and defining work in the career of the masterful playwright, Sweet Bird of Youth explores a good portion of Williams' trademark themes including repression, Southern authority, nostalgia and aging obsolescence.

The metaphorical title refers more specifically to the fledgling romance between Chance Wayne (Paul Newman) and the daughter of a domineering politician, Heavenly (Shirley Knight), yet it's the performance of Geraldine Page as the aging, listless former Hollywood star that leaves its stamp on the film.

Utilizing flashbacks and cold-hard marginalization, the film becomes an acute examination of love and the pursuit of fame and fortune. As Chance says himself, "the biggest of all differences between people is between those who have had pleasure in love and those who haven't."

The ending is unfortunately first-rate Hollywood smudging and unsuitably optimistic, yet at the very least it makes logical sense opposed to the quick touch-up on the end to the aforementioned film version of The Cat on a Hot Tin Roof.

Also Williams' more explicit themes are slightly hushed and inferred upon in order to slip by censors, yet the crackling dialogue and the rich, relatable and deeply inflicted characters remain firmly in tact throughout. [A-]
Posted by Chase Kahn at 11:09 PM