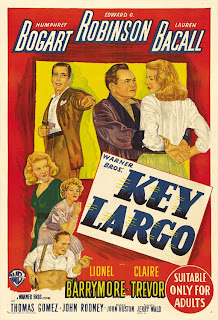 Loosely adapted from the 1939 Maxwell Anderson stage play, John Huston's Key Largo ('48) is a ratchet-tight one-set psychological film noir about selflessness and sticking your neck out in the face of oppression, evil and cruelty and all that jazz.

Taking place entirely inside and around a Florida Keys hotel during a hurricane, the film is owned by Edward G. Robinson's performance as the notorious gangster Johnny Rocco, who is holed up inside, keeping the hotel owner (Lionel Barrymore), his daughter (Lauren Bacall) and a Army veteran (Humphrey Bogart) at his mercy.

Of course, it's a classic Bogart role and performance (as another cynical practitioner of self-preservation who sees a sudden change of heart), as John Huston's slick direction and smooth accompanying dialogue make sweet music throughout. Even Claire Trevor's washed-up, alcoholic dive singer (an Oscar winning performance) has a moment or two in the spotlight - including a humiliating a cappella crooning for the promise of a glass of whiskey - and she nails them.

An identity swap involving a main character actually severely hinders the impact of the finale, but this is still a poignant, balmy practice in psychological power-plays with a stunning cast. Think of a more expansive version of The Petrified Forest ('37), only with Bogart now taking his turn as the heroic hostage. [A-]
Posted by Chase Kahn at 9:42 PM