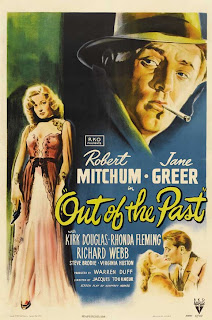 The best film noirs for me have - and always will be - the ones that emphasize that undying and unseen force that manipulates and acts against our characters, ultimately resulting in an inevitable, hard-luck fate as a product of their line of work, their passionate romances, or their past.

In Jacques Tourneur's landmark noir, Out of the Past ('47), the latter notion, in which the events or mistakes of the past come back to haunt our character, is taken to its most literal degree, foregoing mere subtextual existence and sneaking its way all the way into the title.

Robert Mitchum plays the lead, a gas-station owner who is pulled back into a seedy ring of gamblers, dames and gumshoes after initially leaving the group out of spite and a foiled plot to run away with the ambiguous Kathie Moffat (Jane Greer), an old flame of the ringleader, Whit Sterling (Kirk Douglas).

Brilliantly combining all of the traditional elements of film noir - low-key lighting, futility, femme fatale, seduction, etc. - Daniel Mainwaring's script (based on his own novel) is ultimately one of the best examples of man's inability to re-write his own fate. [A]
Posted by Chase Kahn at 7:50 AM