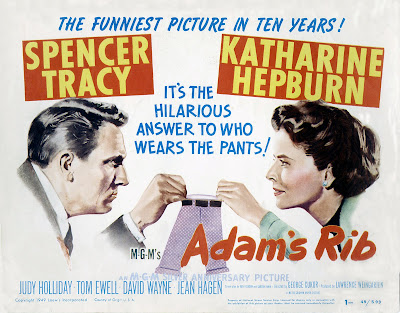 The greatest thing about George Cukor's Adam's Rib ('49) is the way that it manages to prematurely address gender equality and women's rights and do it in a way that's unfussy and delicately comedic.

Katharine Hepburn, who would constantly play roles in which her chiseled features and self-confidence threatened to dominate her male co-stars, is perfect here in one of her better comedic roles and films.

Written by Ruth Gordon and Garson Kanin, the screenplay (a deserved Oscar nominee) is based on a real-life court case in which a woman was tried for assault after catching her husband's deceit first-hand. Hepburn's Amanda Bonner is the defendant while Spencer Tracy's Adam prosecutes in this definitive battle-of-the-sexes.

Adam's Rib isn't a howler or anything, but it's a brave film that only becomes more relevant with each passing year. It also features two noteworthy appearances by Judy Holliday (Born Yesterday, Bells Are Ringing) and Jean Hagen (Singin' in the Rain). [B+]
Posted by Chase Kahn at 5:54 PM