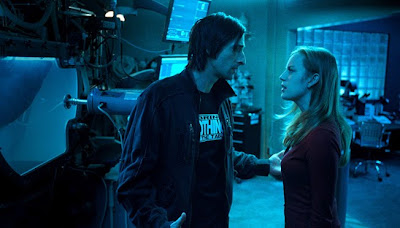 Advertised as a genetic freakshow monster-flick, Vincenzo Natali's Splice is actually something far more darkly peculiar and creepily absorbing. It still chugs too much like an icky genre schlocker at times, but for the willing participant, it's that rare horror film that eschews cheap thrills in favor of discomforting topicality and psychological debilitation.

Like a recently discovered David Cronenberg effort from thirty years ago, Splice takes a reasonably familiar horror formula and turns it on its head, morphing into a disturbing resource of violence and sexual physicality, not to mention social concern.

Like Videodrome (which loosely examined the effects of raw violence on television), Splice similarly deals in the 21st century realm of genetic science and its disturbing future. Rather than simply crafting a slasher, it's fortunately a lot smarter and a lot more distinguished.

Unexpectedly, just as the film giddily taps into those dark, treacherously unsettling waters, it reverts back to its genre casing, limping to a mute, dishonest and predictable conclusion that was set up an hour ago. Such a folly could be excused more readily had the rest of the film in question been as proportionately vapid and tasteless - we'll take what we can get. [B-]
Posted by Chase Kahn at 9:06 PM