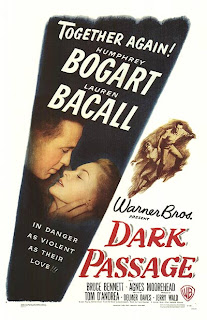 This Warner Bros. film noir, a follow up to The Big Sleep ('46), is a commendable, technically affluent potboiler in the first half, but this Delmer Daves penned screenplay (based on the 1946 David Goodis novel) is too unspectacular to merit the talents of its cast.

The proceeding romp entails the journey of an escaped convict (Humphrey Bogart) who runs into a willing accomplice (Lauren Bacall) and seeks reconstructive facial surgery to alter his appearance both physically and metaphorically, as he sets out to prove his innocence.

The first forty-five minutes are shot almost entirely from a first-person point-of-view, as Bogart's face doesn't even appear until the one-hour mark. (His stream-of-consciousness narration serves to hold us over.) The effect is a bit of a double-edged sword - by turns dazzling and detrimental - for it provides both virtuoso camerawork and limited screen-time for our chiseled protagonist.

And once the camera becomes complacently third-person, Dark Passage wilts a tad under its stable but insubstantial plotting. Perhaps the biggest swerve from the road is the one that surprises us with its optimism. Nevertheless, the ride is nervy and engaging, registering as a middleweight Bogart vehicle, preceded and followed by better efforts. [B]
Posted by Chase Kahn at 4:49 PM