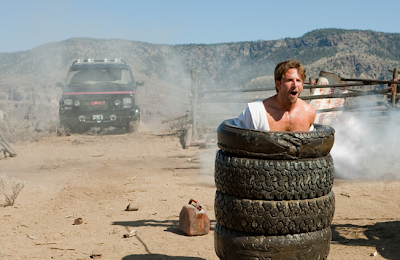 Joe Carnahan's The A-Team is mindless, inoffensive action-movie lunacy of the most disorderly kind. Bounding from one set-piece to the next without any sense of rhythm or aplomb, the experience is akin to watching a movie on fast-forward - or at least one of those "flashes" on Chuck.

In this day and age, the modern action film has evolved into a fusillade of increasingly implausible vehicular manipulations, and The A-Team furthers that development (or rather decline) leaps and bounds. Such physically ignorant agility could be overlooked if the rest of the film wasn't as equally oblivious as that flying tank.

And doubling the disturbing action-front trends are the visual kinetics employed by director Joe Carnahan, cinematographer Mauro Fiore and editors Jim May and Roger Barton, who chop, splice and rattle their way through the numerous exhibitions of high-flying acrobatics and manage to come up with nothing relatively exciting or even remotely comprehensible, and that's all before the "who's on what side" government-military agency plot even picks up steam.

There are some okay performances by Liam Neeson, Sharlto Copley and a slimy, roach-like Patrick Wilson as one of the many crooked agency villains, but on the whole their actions are hardly worth the effort in trying to keep up with the FX department.

Add lucrative special-ops exploits with visual incoherence and narrative coiling and you get a garbled, accelerated and dizzily combustible 21st century action romp. I did laugh a few times, but whether out of genuine amusement or simply disbelief is one matter I'm still unsure of. [C]
Posted by Chase Kahn at 5:14 PM