A stripped-down, comical and sophisticated prisoner-of-war mystery, Billy Wilder's Stalag 17 ('53) concerns the matter of an unknown informant in barracks four of the titular German prison camp - most believe it's a cynical swindler named Sefton (William Holden), but he's committed to proving otherwise.

Among the stable of goons and loons are a mute named Joey (Robinson Stone), a spoiled Lieutenant (Don Taylor), a confrontational stiff (Neville Brand) and a pair of stooges named "Animal" (Robert Strauss) and Shapiro (Harvey Lembeck). They're goofy and a tad too relevant, but Wilder (also a co-writer) manages to make even these buffoons appropriately-sketched and eventually, wholly likeable.

Meanwhile, William Holden's Sefton, who welcomes suspicion with his privileged dealings outside of the barracks and his cigarette-trading rackets, is a classic movie cool-guy with his lumberjack hat and derisive cracks. Even his inevitable vindication doesn't lead to a drastically different mode of self-preservation. 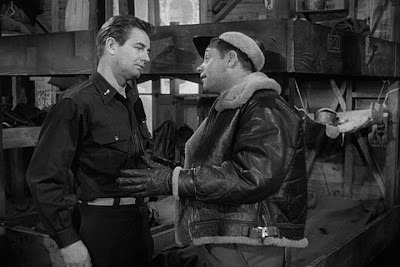 And that revelatory scene, in which the real mole's identity is revealed, just happens to be a knockout and one of Wilder's finest accomplishments. Ironically set to a human train of prisoners bellowing about the barracks chanting, "When Johnny Comes Marching Home," the scene is a masterly reveal, with Holden's J.J. Sefton lurking bedside as the swinging of a lightbulb alerts his attention.

Though significantly less propagandist, Stalag 17 bears many similarities to Five Graves to Cairo with its goofily hazardous plotting and Nazi bewilderment. Both films are compelling wartime yarns, but there isn't any question which one Sefton would go for. [A-]
Posted by Chase Kahn at 6:29 PM