Summer Regards: They Died With Their Boots On (1941) 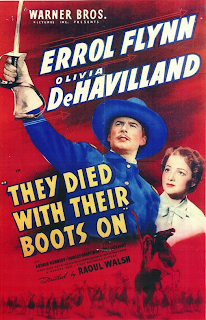 Errol Flynn is George Custer in Raoul Walsh's They Died With Their Boots On ('41), a decidedly sympathetic take on the controversial General who so infamously gave up his life and the lives of his men in the Battle of Little Big Horn.

Here, Custer is depicted as a flashy, reckless, fortunately blessed military officer as he clumsily rises from West Point cadet to Civil War hero. Wally Kline and Aeneas Mackenzie's script is light on battlefield maneuvers and heavy on gushy romance and the dirty politics and greed which led to the plight of the Native Americans in the West, as Custer is seen leading the protests.

Avoiding both the drab austerity of Michael Curtiz's The Charge of the Light Brigade ('36) and the poignant demythicizing of John Ford's Fort Apache ('48), They Died With Their Boots On does benefit from a dreamy, cozy romance between Errol Flynn and Olivia de Havilland, which momentarily minimizes the inevitable Native American conflict.

History has been nothing if not nebulous to the alignment of Custer's deserved or undeserved glory. They Died With Their Boots On certainly shouldn't convince anyone of the man's true legacy (and as an indefinite statement, it's needlessly long-winded), but somehow it manages to strike a stable balance between shameless glorification and earnest shame towards western expansion. [B-]
Posted by Chase Kahn at 7:03 PM