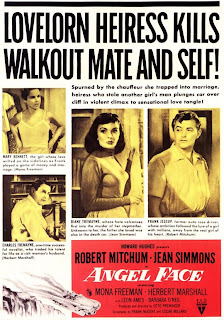 In Otto Preminger's simple yet expertly-woven Angel Face ('52), a classic film noir about the trappings of sexual desire, the Austro-Hungarian director takes a fundamental femme fatale plot and turns out something quite extraordinary - hauntingly seductive and deeply felt.

Jean Simmons is cast marvelously against type here as the titular object of affection, a repressed teenager who finds a worthy partner-in-crime in a sly ambulance driver (Robert Mitchum) and spins him into a web of deceit and murder.

What separates Angel Face from other films of its ilk is that desirable performance by Ms. Simmons, who (as we know by those haunting piano strokes) is ultimately up to no good, yet seems to keep fooling the smooth-talking Frank Jessup (Mitchum) at every turn.

In the end, the audience is able to sympathize with Frank, a seemingly ignorant and wrong-footed man, because deep down, we can understand the allure of that angelic face. [A-]
Posted by Chase Kahn at 11:38 PM