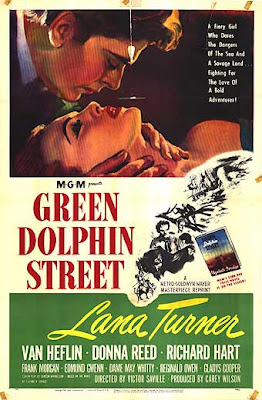 Lana Turner and Donna Reed are sisters competing for the love of a doctor's son in Victor Saville's Green Dolphin Street ('47), another lavish, sweeping big-screen romance financed by Metro-Goldwyn-Mayer in their timeless attempt to duplicate the success of Gone With the Wind ('39).

Set in the 19th century in the small, fictional island town of St. Pierre before setting sail for New Zealand for a good dose of melodrama amidst earthquakes, tidal waves and tribal uprisings, the excellent performances by Lana Turner and Van Heflin in particular are dirtied by the film's capricious histrionics and muddy source material.

Richard Hart plays the object of the two young and kittenish Patourel sisters, Marguerite (Reed) and Marianne (Turner). He unnaturally avoids the savvy and conniving Marianne in favor of the puppy-eyed and prudent Marguerite, which ruffles more than a few feathers. 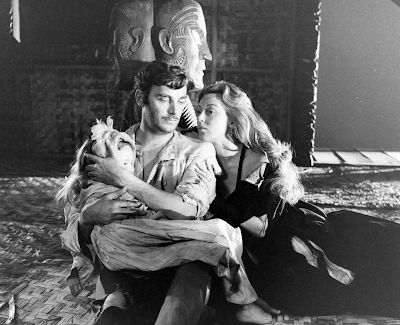 Richard Hart and Lana Turner on the set of Green Dolphin Street.
Doing her best Scarlett O'Hara impression, Marianne sets a plan in motion to buy the heart of her admiration, and when a letter arrives asking her hand in marriage, it appears that she has succeeded, only to find out that it was a mere muff of a pen-stroke. (Don't worry, Marianne, we thought it was a cheap contrivance ourselves.)

Poor Marguerite, back on her homeland, after witnessing the love of her life take off with her sister and watching her parents pass away before her eyes, is left looking for answers. Luckily, she stumbles into a convent and finds her love in God. "I've found what I'm looking for," she says.

Green Dolphin Street, wonderfully shot in black-and-white by George J. Folsey, has its juicy moments of intrigue and wicked irony, but inevitably it comes off as elegant, overheated twaddle. I can get behind the idea of forbidden romance and tough luck - it's the underlying message of joy and meaning through the unexpected that feels phony and dishonest. [C+]