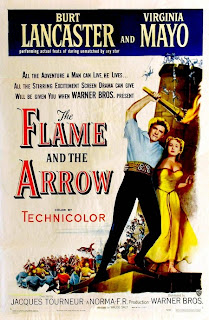 A medieval-Italian Robin Hood, Jacques Tourneur's The Flame and the Arrow ('50) is breezy, disposable fun, though its acrobatic, swashbuckling defiance in the face of tyranny and damsel-swooning romantics hardly hide its obvious inspiration.

One of French-American director Tourneur's more unbecoming features (he's known for his black-and-white prowess in Cat People and Out of the Past), the film has a few shining qualities in the production department, but it's too hackneyed to fully present itself as a standalone accomplishment.

Burt Lancaster plays the renegade hero who's quick and snappy with a bow (what else?), but I've always thought that he played these roles a little too giddily and exuberantly. As much as he tries to be, he's more Bruce Willis than Errol Flynn.

There are a few standout scenes (like an incognito circus show and a sword duel in the dark) that register beyond the usual peasant uprisings and merry-men hooting, but The Flame and the Arrow is simply a knock-off - diverting, pleasant, cozy even - but a knock-off nonetheless. [B-]
Posted by Chase Kahn at 10:20 PM