Like a cross between The Lost Patrol ('34) and Zulu ('64), the film is a minimalist desert-survival scrap before turning into an against-the-odds "last stand" actioner. It's the perfect recipe for more patriotic chest-pounding (the allies victory in North Africa was hot off the presses), and any propagandist overtones in the second-half feel earned.

One of the interesting aspects of Sahara is its all-encompassing spread of supporting characters, all of whom represent a faction in the war. There's a busted-up group of British medical officers, a Frenchman, a South African, a British-Sudanese officer and a duo of prisoners - one a sympathetic Italian and the other a deceptive, grounded German Luftwaffe pilot. 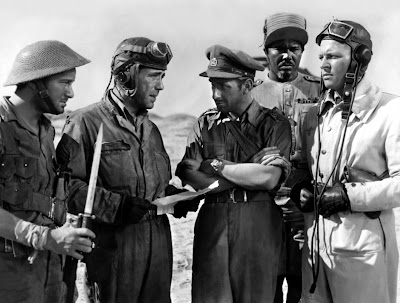 As Sgt. Gunn (Humphrey Bogart) and his two American shotgun riders set out to get back into the fight, they run into this multinational myriad of soldiers bit-by-bit like something out of a Japanese RPG. The effect and subsequent stand-off allows our characters (and the trio of screenwriters) to miniaturize the mood, feeling and politics of the European front before our eyes.

A product of the Hungarian dream team, so to speak, Sahara benefits from the thrilling set pieces of director Zoltán Korda along with a stirring Miklós Rózsa score and Rudolph Maté's black-and-white lensing. Bogart didn't serve during World War II off the screen, but on it, he was the perfect soldier and Sahara may be his best film in uniform. [A-]
Posted by Chase Kahn at 8:06 PM