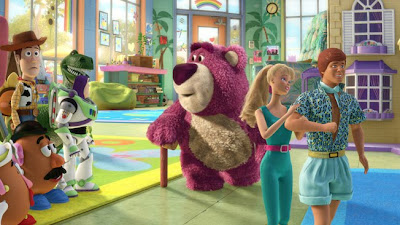 Lee Unkrich's Toy Story 3 is a brilliant - and frankly, unexpected - close to the decades-spanning animated series that began sixteen years ago with a little film from the upstart animation studio known as Pixar.

Witty, firm and more exciting than most live-action summer flings, the third installment, like the first two films, carries a hefty quotient of emotional substance into its initial premise of life after playtime and lurking abandonment after obsolescence.

A new entry to the series means more domestic turbulence, more impractical daring, friendly squabbling and yearning plastic characters, yet Toy Story 3 never feels truly needless or extraneous and despite the eleven-year hiatus, these toys feel as alive as ever.

Beginning with our familiar pen pals and their ever-growing owner, Andy, the film sets up the premise with the once puffy-cheeked youngster on his way to college and playland obscurity. After a motherly mix-up, the gang find themselves at the crayola-styled Sunnyside Daycare, where willing children are ready to play for hours on end and they never grow out of it.

Running the place, however, is a fluffy purple bear named Lots-O (Ned Beatty) who smells like strawberries and runs his daycare with the utmost precision. It's this middle section - which is sort of like a toy-store Stalag 17 - that brings up some memorable new faces (Micheal Keaton voicing an effeminately-styled Ken is certainly a standout) and some desperate pleas for domesticity.

Ultimately, these films have always been about the fear of rejection, detachment and antiquity and in Toy Story 3, we have the inevitable confluence of all these anxieties into the immediate present. When it comes right down to it, these toys, good or bad, are just like us - they just want to be wanted. [A-]
Posted by Chase Kahn at 4:57 PM