The goofy cousin to The Dirty Dozen ('67), Kelly's Heroes ('70) may not quite be as directly hostile as its obvious inspiration (even going so far as to borrow a few cast members), but its tongue-in-cheek depiction of soldier insubordination and piecemeal squad makeup certainly bears a strong resemblance.

Chronicling a rag-tag group of soldiers who abandon their post and undertake a reckless mission to steal $16 million in Nazi gold, Kelly's Heroes reunites director Brian G. Hutton and star Clint Eastwood, who teamed up for the thrilling and comparatively straight-faced Where Eagles Dare ('68).

With a well-stocked stable of comedians, including Telly Savalas and Don Rickles, plus a tank-riding hippie named "Oddball" played by Donald Sutherland, the film works wonders with the way it plays off of Eastwood's quiet, casual serenity. 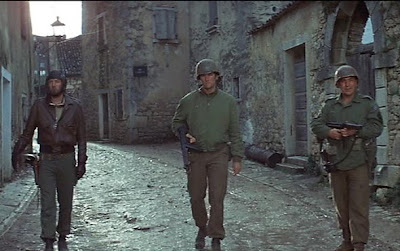 Beginning with a stormy night in a German outpost, we see the familiar stare and clenched-jaw of our hero just before he's pointed-out by a Nazi officer. His floors the Jeep he's sitting in and as he makes his getaway, Mike Curb Congregation's "Burning Bridges," with its harmonized vocals and hippie-jam vibe kicks in and immediately we know what we're in for.

At one point during the final action set-piece, which to the audience's delight runs almost a full hour, a self-satirizing Clint Eastwood willingly reenacts the standoff from The Good, The Bad and The Ugly, replacing Lee Van Cleef with a German Tiger tank.

By this time, Kelly's Heroes has ceased in its ability to surprise - the World War II farce that it is has taken a hold of us so much so that we've come to expect anything, and luckily, we get it in spades. [A-]
Posted by Chase Kahn at 9:37 PM