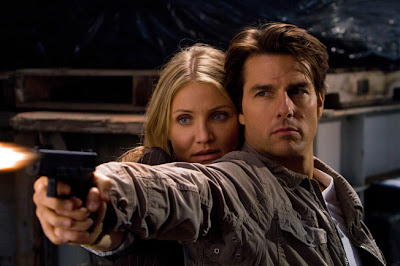 James Mangold's formal and shiny Knight and Day is also slack and unavoidably ridiculous. It pairs two illustrious, sparkling yet aging megastars and drops them off in a middling, globetrotting spectacle of exotic locales and loony spy-thriller trappings.

It works best in the early moments when an efficient mystery man named Roy Miller (Tom Cruise) - with his sly smile and off-hand submissions - nips at the heels of a ditsy blond (Cameron Diaz) who's just trying to get home for her sister's wedding.

Of course, it's soon revealed why Roy keeps having to instinctively dismantle all manners of opposition in the presence of his new dame - and thus why a disinterested Viola Davis and Peter Sarsgaard keep frowning and sulking in their new suits - but the surprise is a downer that neither a remote island getaway or a Spanish motorbike pursuit can obscure.

From the opening airport entanglement to the cafe stand-off and subsequent freeway chase, this early portion zings and jabs in that mostly comforting action-comedy sizzle, yet once all ambiguities and alliances are resolved and the purpose for all of the hat-and-sunglasses covertness revealed, Knight and Day becomes something much more staunchly second-rate and perfunctory - frankly, it's a bore. [C]
Posted by Chase Kahn at 5:12 PM