An iconoclastic genre-buster, Robert Aldrich's The Dirty Dozen ('67), with its antagonistic cynicism and colorfully-flawed antiheroes, helped pave the way for similar wartime tales of goofy military insubordination like Kelly's Heroes ('70) and Inglourious Basterds ('09).

Faced with death or life in prison, twelve convicts are given the opportunity to participate in a covert mission behind enemy lines with the promise of a reduced sentence. Major John Reisman (Lee Marvin), a pesky, argumentative officer, resents the assignment to train and lead the mission, viewing it as a nothing less than suicide.

The majority of the film's jesting anti-military slant comes from the uptight, authoritative appearances of Colonel Dasher Breed (Robert Ryan) and Major General Worden (Ernest Borgnine), who fuel both Reisman and his squad's petulance and overall disdain. 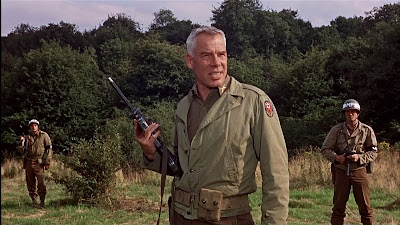 Among the more memorable supporting turns are a demented Telly Savalas and a cross, screwy John Cassavetes, who take center stage in the early training scenes allowing the brutes played by Charles Bronson and Jim Brown to take over once the bullets start flying.

If there's one letdown in this raging, ruthless 150-minute excursion, it's that the much-talked about final mission at a countryside mansion, deep behind Nazi lines, is a bit of a comedown - a touch inert and flavorless, although it boils to a fiery eruption.

But what drives The Dirty Dozen - and what no doubt fuels its immortality and timeless relevance - is that it's the ultimate action film about redemption, vindication and sticking it back to the world that rejected you with a sly grin and a machine gun firmly in hand. [B+]
Posted by Chase Kahn at 1:51 PM