John Huston's Across the Pacific ('42) is a convoluted makeshift potboiler starring Humphrey Bogart, Mary Astor and Sydney Greenstreet in a blatant The Maltese Falcon ('41) reunion. It's one of those lesser Bogart vehicles that's more about the fedora and the wisecracks than anything else.

Essentially a noirish spy-thriller set just days before the Japanese attack on Pearl Harbor, it follows a U.S. spy (Bogart) who boards a Japanese ship en route to China where he meets two fellow passengers, a large, quietly observant oaf (Greenstreet) and a flirty Canadian (Astor). All of them seem to have secrets to hide and it's only a matter of time before they (and the audience) can figure it out.

But in a film like Across the Pacific, where revelations and twists pile up like timber, it's best to simply enjoy the actors and the conceited, sharp-edged dialogue - trying to decipher the ins and outs of such a half-baked espionage whopper in retrospect seems fruitless. 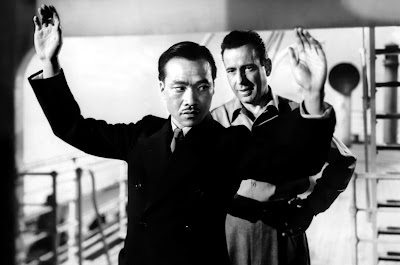 Firstly, the mere title is bamboozling and misleading, given that the Genoa Maru, the ship that Bogie and company hook up on, doesn't even come close to crossing the Pacific but rather eludes to the oncoming threat of war. Secondly, uncovering the axis plot at hand reveals a batty scheme to flood the Panama Canal. (You can't make this stuff up.)

Luckily by the end of this whiz-bang spy-puzzler, the sides are aligned and the task at hand plainly evident. Bogart carries us through the more nebulous and inane plot turns, even through an unintentionally hilarious use of a model plane in the climactic action scene. Finally, Bogie saves the day - what he did exactly, and how, we're still not really sure. [B]
Posted by Chase Kahn at 3:14 PM