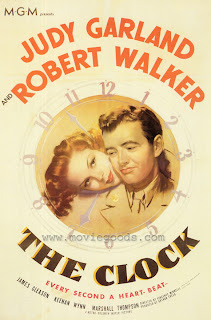 A small-town soldier (Robert Walker) and a secretary (Judy Garland) meet in the hustle and bustle of the big city in Vincente Minnelli's The Clock ('45), a swooning 48-hour love story about fate, time and coincidence.

The film's title isn't just adorably applied in reference to the couple's natural meeting point, but rather an added emphasis on the passing of time and the seconds that bind us to our eventual destination - a time map in a crowd of millions.

For instance, when our two lovebirds separate in the riot-like subway station, ironically enough, it's the clock at the Astor Hotel that brings them back together, as if their paths were in the process of realigning.

In what was essentially Judy Garland's first dramatic role (although I'd argue that she did plenty of the same in Meet Me in St. Louis), the then-23 year-old actress slides nicely into the role of the helpless romantic who doesn't belt a tune.

Meanwhile, Robert Walker, far from his eventual career performance as the psychotic murder in Alfred Hitchcock's Strangers on a Train ('51), appears to be right off the set of Thirty Seconds to Tokyo ('44) as a convincing Midwestern countrymen. [B+]
Posted by Chase Kahn at 10:58 AM