Among the worst of faults in Delmer Daves' Destination Tokyo ('43) - and there are plenty - is the fact that it manages to bait its star, Cary Grant, into giving one of his most impersonal and blandish performances. On the whole, it's a flimsily made, overlong and laggard piece of WWII fiction.

The film traces a U.S. submarine, the Copperfin, through a covert operation into Tokyo Bay, gathering Intel for the eventual "Doolittle Raid" in 1942. Captain Cassidy (Cary Grant) is an experienced, calm-under-pressure pro and his crew is accommodating and affable, which makes for an efficient submarine, but a rather stodgy watch.

In Destination Tokyo, drama is something to be manufactured - an emergency appendicitis operation stinks up the final act - rather than adeptly applied in screw-tight fashion. Meanwhile, Grant's Captain Cassidy is frankly a bore, an officer who worries about his wife and kids (as seen through flashbacks) but otherwise seems to have nothing of intrigue going on inside. 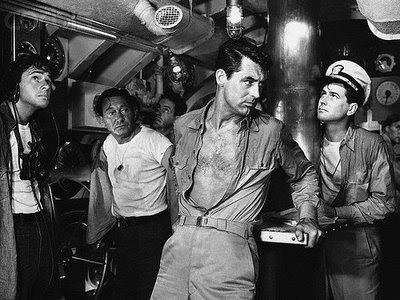 As is the case with most Warner Bros. productions of the period, Destination Tokyo also relies heavily on models and bathtub sea battles, but rarely has the form been pushed to the limit and utilized as badly as it is here. (In fact, I'll wager that the film would benefit from a few ticks in tension and claustrophobia by leaving the Pacific Ocean surroundings to the imagination.)

As a fictional companion piece to the excellent Thirty Seconds to Tokyo (essentially the Doolittle Raid from the Navy's point-of-view), Destination Tokyo will limp and stagger around hopelessly. In direct comparison or on its own, this is one meatless, tame and shoddy WWII film. [C]
Posted by Chase Kahn at 4:00 PM