When asked initially, Lancaster (playing the resourceful and obstinate Paul Labiche) scoffs at the idea of risking his life for senseless artifacts, but as the film and that wealthy German train roll along, he witnesses the depth and affluence of national pride first-hand, molding The Train into a beautiful coalescence of first-rate action filmmaking and plucky patriotic collaboration.

Shot genuinely and meticulously with real trains on location - opposed to the application of miniatures or process screening - The Train has a rare industrialized authenticity in its tilted angles and geographically perceptive cuts that are heightened by Jean Tournier and Walter Wottitz's black-and-white cinematography. (Director John Frankenheimer once proudly remarked that it was "the last action film shot in black-and-white.") 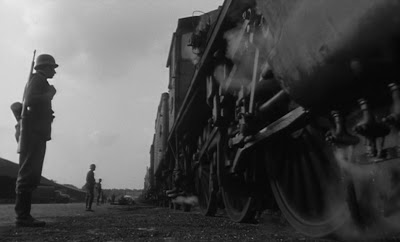 As the chief saboteur, Burt Lancaster displays both virtuoso heroism and timidity - someone caught between belief and morality. His on-the-job transformation from caretaker to revolutionary provides the film with an all too rare emotional through-line.

As he stands face-to-face with his German counterpart in the final moments, the art thief vehemently, and perhaps accurately, questions the saboteur's motivations - "Now this minute, you couldn't tell me why you did what you did."

With a glance at a gunned-down, motionless pile of former French hostages, Labiche doesn't know how to answer, but he doesn't need to, the final juxtaposition between art and life speaks for itself. Labiche is a man who doesn't firmly believe in the cause, but if it's worth the lives of his countrymen, that's sufficient enough for him. [A]
Posted by Chase Kahn at 8:39 PM