The Wizard of Blu

This morning, at approximately 9:55 am, I had to go to Target to pick up Victor Fleming's The Wizard of Oz on Blu-ray (pictured below). I wasn't planning on it, but I suddenly realized that I needed to. As a self-respecting film fan who is a nostalgic observer of history and a high-def junkie, I just had to. 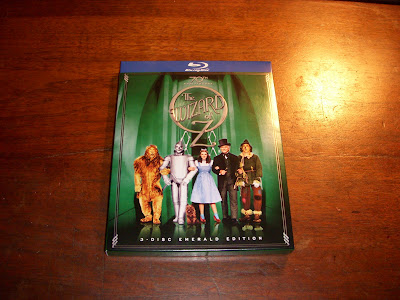 Warner Bros. dug up the original 3-strip Technicolor camera negative to the classic family film and has beefed up the resolution big time as part of an 8-month restoration process. As described in one of the features inside the 3-disc set, this is The Wizard of Oz like its never been seen before -- brighter, clearer, bolder.
The kind of work that Warner Home Video did to get this thing done quickly and done the right way needs to be recognized and rewarded -- it's really astounding and I think it's important for the home video industry and Blu-ray as a format that sales are strong, because I know I'm not alone in saying that I wished more high-profile catalog titles were readily available. (Gone With the Wind and North By Northwest are on their way in a few months).
By the way, at about 10:00 am Central time, I had picked up the second-to-last copy of the $34.99 Emerald Edition (possibly more in storage?) but I've heard some people say that Target locations near them have run out of the more economical, less excessive package (opposed to the $60+ Ultimate Collector's Edition).
I'll write more on the actual film in a few days -- it's place in history, how good I think it is, etc. Of course, I've seen the The Wizard of Oz probably 6-7 times in my life, but probably none in the last 8 years or so. Looking forward to seeing it all the way through again and look forward to writing about it as well!
Posted by Chase Kahn at 10:25 PM