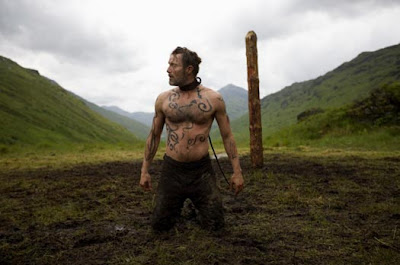 Refn's previous filmography includes the Pusher trilogy and the yet-to-be-released biographical prison drama, Bronson -- reported by many, but not all, to be very good. Valhalla Rising did not receive very many accolades at its first screening at the Venice Film Festival (if any), but certainly a film by an up-and-comer, cult-leading, distinct personality like Refn is a pretty smart move by IFC and an off-the-radar move as well for the small studio.
IFC Films also has U.S. rights to Ken Loach's Looking For Eric and Lars Von Trier's Antichrist. I was kind of hoping they would buy Tom Ford's A Single Man or Samuel Maoz's Lebanon.
Plus, am I the only one who just absolutely digs Viking movies? I just wish there were more good ones. I even wanted to see Pathfinder for the longest time. Richard Fleischer's The Vikings (1958) and Jon McTiernan's The 13th Warrior (1999) are my favorites. I can't even think of any other decent ones.
Posted by Chase Kahn at 10:07 AM