The Venice Film Festival, now overshadowed the by arrival of Toronto on Thursday, handed out its awards last night, granting their top prize, the Golden Lion Award, to Samuel Moaz's Lebanon, an Israeli war drama taking place entirely inside a tank. 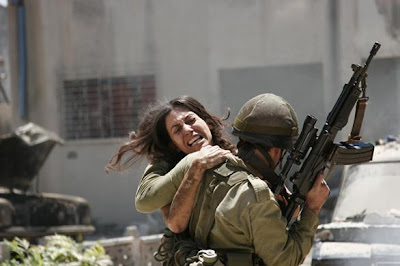 Darren Aronosfky's The Wrestler took home the Golden Lion Award just a year ago from Venice.
The Grand Jury Prize went to Fatih Akin's Soul Kitchen while Todd Solondz's Life During Wartime took the Best Screenpaly award.
Another noteworthy accolade, and perhaps a sign of things to come, is the Best Actor award being handed out to Colin Firth for his work in Tom Ford's A Single Man, which is an adaptation of the Christopher Isherwood novel set in 1962 Los Angeles about a college professor (Firth) who contemplates suicide following the death of his lover (which, as it were, is a man). Julianne Moore and Matthew Goode also co-star.
Posted by Chase Kahn at 7:49 AM