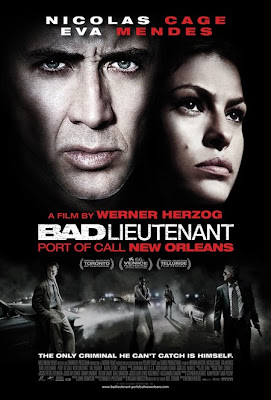 The currently underway (September 2-12) Venice Film Festival has debuted a fair number of important films today. First off, John Hillcoat's The Road, which was panned by Variety's Todd McCarthy yesterday is now seeing some love and therefore, I have no idea what to make of it. The general consesus is still decidedly mixed, though -- "gripping, harrowing, tense" by its admirers and "dull, dramatically inert and dreary" by its detractors.
Meanwhile, Werner Herzog's return to scripted material (opposed to his numerous documentaries) appears to have not gone so well with Bad Lieutenant: Port Call of New Orleans, a post-Katrina set cop drama starring Nicolas Cage, Eva Mendes and Val Kilmer.
Bad Lieutenant has received very similar descriptions as being decidedly "weird" and "loopy", with some enjoying its eccentric craziness and others rejecting it. Although no one seems to just flat-out go one way or the other -- response is cold to say the least.
Giussepe Tornatore's Baaria, a 163-minute Italian homage to the director's own family, heritage and town, is being described as "overblown". A $40 million dollar epic, even its converted are all too readily acknowledging its flaws. It does have a score by Ennio Morricone, although by all acounts, like the film, it too is overblown.
Todd Solondz's Life During Wartime is no doubt the talk of the festival thus far if you're talking about unanimous praise. Apparently, it's a succesor to his 1998 work, Happiness.
Posted by Chase Kahn at 4:43 PM