Ask and You Shall Receive

So Paramount's micro-budget horror film that has the internet set ablaze the past few weeks, called Paranormal Activity, released in 12 theaters nationwide last weekend plus some midnight showings at college campuses. 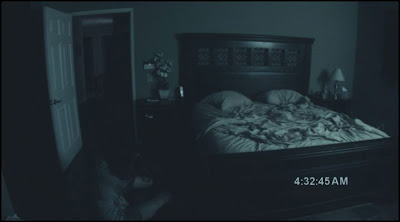 For the past week, you could sign on to Paramount's website and "demand" that the film be shown in your area. Living in the Dallas/Ft. Worth area, my "demand" went a long way and my city was #4 on the list until I got an e-mail a moment ago explaining that it would be showing in the following cities this Friday:
Atlanta, GA - Chicago, IL - Dallas, TX - DC/Baltimore, MD - Denver, CO - Detroit, MI - Houston, TX - Los Angeles, CA - Las Vegas, NV - Miami, FL - Minneapolis, MN - New York, NY - Philadelphia, PA - Phoenix, AZ - Sacramento, CA - San Antonio, TX - San Diego, CA - San Francisco, CA - San Jose, CA - and Tampa, FL.
So the twenty cities with the most votes will get the film on Friday -- pretty cool, right? Paranormal Activity is being compared to 1999's The Blair Witch Project.
Posted by Chase Kahn at 9:05 PM