John Hillcoat's The Road, a much anticipated post-apocalyptic film adapted from Cormac McCarthy's 2006 best-selling and much-beloved novel has just been hit with a huge pan by Variety's Todd McCarthy.
Originally set for release last year, The Road (Dimension, 10.16.09) has been delayed a full year until now, when will finally play at the Venice Film Festival today. McCarthy's review comes from an 08.27 screening in Los Angeles.
He writes:
"This Road leads nowhere...Except for the physical aspects of this bleak odyssey by a father and son through a post-apocalyptic landscape, this long-delayed production falls dispiritingly short on every front. Showing clear signs of being test-screened and futzed with to death."
"But Hillcoat, who played with heavy violence in "The Proposition" and made some of it stick, shows no talent for or inclination toward setting up a scene here; any number of sequences in "The Road" could have been very suspenseful if built up properly, but Hillcoat, working from a script by Joe Penhall, just hopscotches from scene to scene in almost random fashion without any sense of pacing or dramatic modulation."
It's certainly a big blow and McCarthy's review coinciding with the long delay certainly spells trouble. I'm a big fan of the Australian director John Hillcoat's The Proposition, starring Guy Pearce and released back in 2006, but this review doesn't do much to get me excited. We'll find out more today from Venice. 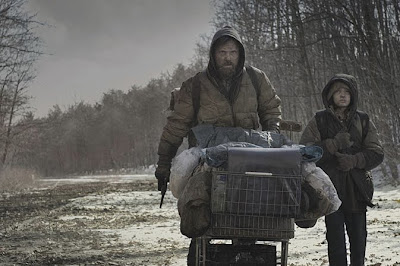 The Road stars Viggo Mortensen, Charlize Theron, Robert Duvall and Garret Dillahunt. It's set to release on October 16th.
Posted by Chase Kahn at 10:33 AM