By Chase Kahn
J.J. Abrams' Star Trek will be released by Paramount on DVD and Blu-ray on 11.17.09. Not surprisingly, there will be three seperate editions: (1) a single-disc DVD release (2) a 2-disc Special Edition DVD and (3) a 3-disc Special Edition Blu-ray. The latter two are loaded with features, although all versions will have the commentary by Abrams and his posse of screenwriters: Alex Kurtzman, Robert Orci and tagalongs Damon Lindelof and Bryan Burk.
More newsworthy, however, at least in my view, is the just released cover art for the release. This picture below is the art that will be on both the 2-disc SE DVD and the 3-disc SE Blu-ray: 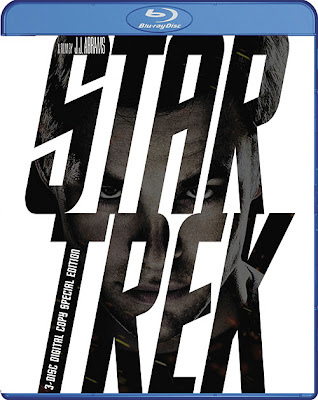 I actually like it a lot. It's simple, but I love the colors and the type, plus it's different from the theatrical motion-blur suckfest that was the domestic poster. I dig the Kubrick stare from Chris Pine's Captain Kirk peeking through the letters, well done.
There is a different single-disc cover, which frankly sucks, that can be seen here. This is the same kind of release strategy that Paramount did with Jon Favreau's Iron Man -- so once again, no surprise. You can read my original review of Star Trek here.
Posted by Chase Kahn at 10:23 AM