Mike Judge invades the working-class environment again, this time with Jason Bateman as his human punching bag for everything horribly rote, unjust, unfair and intolerable about going to work and then coming home to suffer the same methodical cruelty.
Extract is a half-relevant, half-pedestrian rated-R comedy that's a tad redundant but heavy on laughs, even if they are generally broad and obvious. Jason Bateman is in full "Arrested Development" mode as an extract factory owner on the verge - and then in the midst of - a full-blown mid-life crisis. If you're a fan of the show, you know that's a whole-hearted compliment. 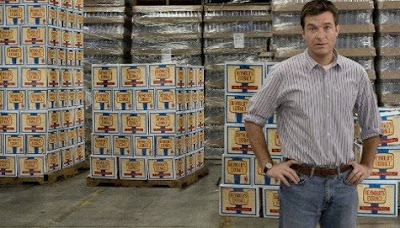 The supporting cast is rounded out with familiar faces like Kristen Wiig as Bateman's wife, Mila Kunis (Forgetting Sarah Marshall) as a smoking hot con artist-turned-factory employee, Ben Affleck as the next door bartender druggie and J.K. Simmons (Juno, Burn After Reading) doing his usual shenanigans around the workplace.
If there is on thing Extract confirms it's that we're a little sick of pot jokes and bad drug experiences, although Bateman does some fantastic physical acting during these scenes. The film is also a little too familiar around the edges, with David Koechner channeling Bill Lumbergh and a few too many implausible encounters, but such is the nature of this beast.
Extract is certainly a broader, more marketable film from Judge after his latest, Idiocracy (2006) peaked at just 130 screens before becoming more profitable and appreciated by his loyal fanbase on DVD. Even with a slightly familiar and redundant new film, Judge still proves that his comedies are more truthful, amusing and honest than most these days.
Posted by Chase Kahn at 3:59 PM