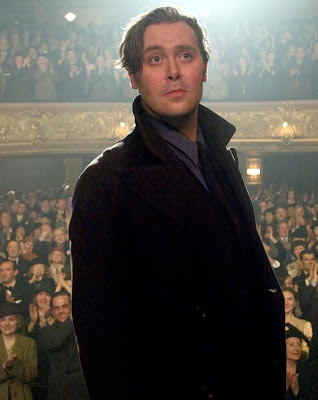 Michael Speier at The Wrap has reported that, finally, Freestyle Releasing will distribute Richard Linklater's Me and Orson Welles in a limited run on 11.25.09, with Warner Home Video handling the DVD release.
The film played to a great response at the Toronto International Film Festival last year, then somehow went untapped until now, nearly a year later. One of the film's biggest fans, Roger Ebert, called it, "one of the best movies about the theater that I've ever seen."
Me and Orson Welles follows a teenager (Zac Efron) who is hired to star in Orson Welles' stage production of Julius Caesar -- this, of course, during Orson's ownership, pre-Hollywood, of the Mercury Theater Group in the late 1930's before "War of the Worlds", RKO, Citizen Kane/William Randolph Hearst and so on.
Christian McKay is said to be stunning as Orson Welles and Claire Danes plays Efron's love interest. You can watch the trailer for Me and Orson Welles here.
Posted by Chase Kahn at 10:52 AM