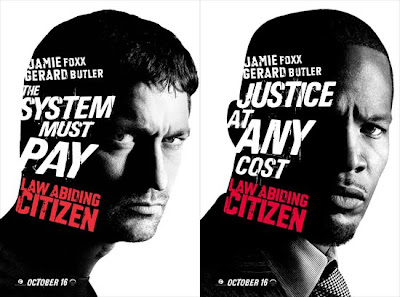 However, after seeing the trailer, I get the feeling that Law Abiding Citizen will be a drunk, wrong-footed, morally confused kind of film. I don't know why, the trailer is decent enough, but it just looks that way. Exploring this kind of material -- i.e. a man fighting the system by provoking it -- needs to be examined without compromise or its not worth examining at all.

Does Butler's character convincingly crossover into this alter ego of vigilance, with personal battles, everyday morality and guilt, or does he just do what he does without personal remorse? My guy tells me it's the latter.

Maybe part of the problem is the casting of Gerard Butler, whom I like, but looks like a complete doofus in a plain, everyman trench coat with glasses and a less threatening shave -- which were no doubt thrown on him to make the Scottish brute appear more innocent and rightfully blood-thirsty.

I hope I'm wrong, because Law Abiding Citizen could induce some interesting dichotomies between the two characters, but I'm fascinated to see how they'll play it, even if it's in a failed, passive sense.