Todd McCarthy's Variety review of Steven Soderbergh's The Informant! isn't quite a rave, but mostly an enthusiastic thumbs-up. He describes the film as, "the wacky little brother of Erin Brockovich", something that, "goofs around lightheartedly while still doing some justice to the true-life story of a zealous but wildly delusional corporate whistle-blower." 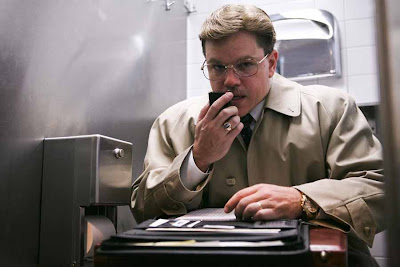 "Having already done a major film that called out big business with a straight face, Soderbergh returns to the same arena with a cocked eyebrow and lots of jokers up his sleeve. The exclamation point on the title and the jaunty, old-fashioned score by Marvin Hamlisch serve as immediate tipoffs as to the film’s hyperreal intentions, which will inevitably put some viewers off, but for others will provide an amusing, original angle on the sort of story that’s almost always done with an earnest sense of self-importance."
McCarthy also describes it as a film that's more "amusingly eccentric" rather than "outright funny", a compliment by his books, but no doubt a speed bump for many. It's being marketed as Oceans Fourteen, so likely the populace will be impervious to any significant, sly and understated performance tweeks or subtle physical comedy -- i.e. expressions, delivery. They just want Matt Damon to put on a fake nose and try to sip out of a champagne bottle.
I'm excited, but I expect reactions, both critically and commercially, to be lukewarm -- at least based on the early word.
Posted by Chase Kahn at 11:23 AM