Korean director Jong Boon-ho's Mother has been acquired by Magnolia Pictures and will apparently be given a platform release early next year. Mother screened at Cannes this May to pretty good/unspectacular reviews and was recently announced as Korea's pick to submit to the Academy for the Best Foreign Language Film category.
Once again, here is another example of a film that will likely be nominated for a Foreign Language Oscar and no one will have seen it. Last year at the Academy Awards, 3 out of the 5 nominees for the Best Foreign Language Film (Departures, The Baader Meinhof Complex, Revanche) were not even released yet.
Of course, Jong Boon-ho struck gold in 2007 with his monster film, The Host -- a movie I honesty did not get at all, but was a big success critically and commercially, especially in Boon-ho's native Korea.
Really, this is just an excuse to post the Cannes poster art for Mother: 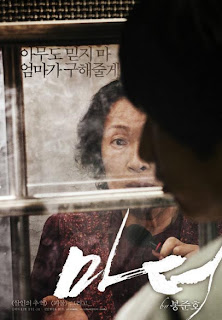