Roman Polanski exploded onto the Hollywood scene in 1968, bringing his avant garde, surrealistic Gothic-horror with him in an adaptation of the late Ira Levin's 1967 novel, Rosemary's Baby.
It would be a disservice to call it one of the greatest horror films of all-time - a distinction that improperly suggests that Rosemary's Baby simply exists to thrill or terrify its audience. It is an unshakable film, a pinnacle in paranoia and an indelibly shot and composed testament to the power of maternal instinct. 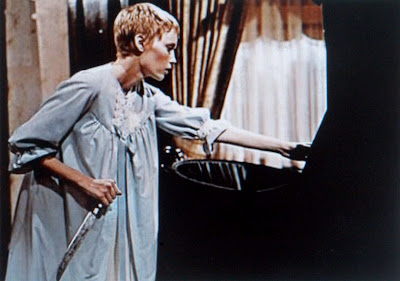 It's a film that knows it has the goods and it takes its time getting there, much to its credit. I love the way that it's formed, almost like a vice just tightening and tightening until full blown hysteria has broken out.
I won't even get into Mia Farrow's frightening performance, the imagery, the masterful editing, or the lived-in, paint-chipped, high-ceiling upper class New York City vibe that perpetrates throughout. It's just that rare film by an auteur that isn't missing a thing, knows where it's going, how to get there and how to put something on screen to create palpable mood and atmosphere.
Just take the opening lullaby sung at the beginning by Mia Farrow. Then, over the opening credits, the song means nothing really. It exudes a sort of eerie melody of uneasiness, sure, but it's ambiguous and indistinct. However, with the exact same song, played over the final shot and then the end credits - all of the sudden, it means everything.
Posted by Chase Kahn at 9:23 PM