Venice: "The Men Who Stare at Goats" Premieres

Grant Heslov's The Men Who Stare at Goats premiered at Venice this morning to very strong accolades from Variety's Derek Elley, Incontention's Guy Lodge and Screen International's Mike Goodridge.
The film is a U.S. military-intelligence farce -- think Coen Brothers and Dr. Strangelove. It's based on Jon Ronson's non-fiction book of the same name which focused on, among other things, the development and research of paranormal military activities. It stars George Clooney and Ewan McGregor, directed by Clooney's frequent collaborator (Good Night and Good Luck, Leatherheads) Grant Heslov, who takes a step up from a producing or writing credit.
I would say buzz at this point is slightly stronger than Steven Soderbergh's The Informant! -- another farcical deadpan comedy with corporate ineptitude and greed subbing for U.S. military craziness. 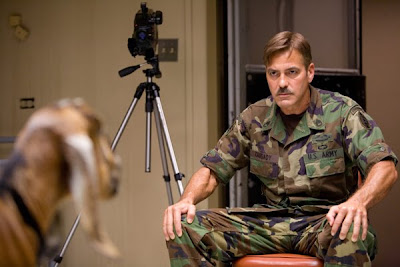