Classic Rewind: All the Brothers Were Valiant (1953) 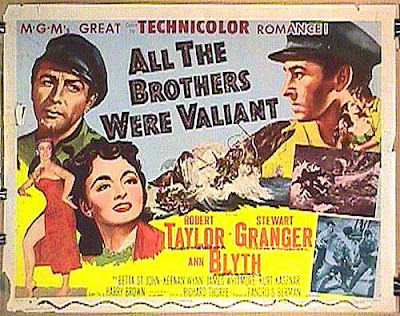 Robert Taylor and Stewart Granger play dueling 19th century whaling captains (who also happen to be brothers and descendants to generations of whalers) in All the Brothers Were Valiant (1953), a seafaring MGM Technicolor action-adventure.

Joel Shore (Taylor) is the younger, inefficient captain who lives by honor and duty while Mark (Granger) is the rough, fearless elder who lives by greed and self-gain. Thought dead, the film takes a turn for the dramatic when Mark is discovered on the port of Tubuai, joining the crew of the Nathan Ross.

Once aboard, Mark shares the tale of his disappearance (a quest for a fortune of pearls, revealed through a distractingly long flashback) as he attempts to turn both the crew and the captain's fresh catch (Ann Blyth) against him, even if it means mutiny.

A critical failure upon its release but a valiant box-office performer, the film is notable for the first and only pairing between two of MGM's biggest stars, the Oscar-nominated color cinematography by George Folsey and because it contains one of famed film-composer Miklos Rosza's lesser-known (and admittedly unimpressive) compositions.

There's an early whaling scene that truly impresses and a fun brawl upon its conclusion, and although I'd recommend All the Brothers Were Valiant to any classic swashbuckling, seaward adventure fan, the optimistic redemption of Mark's selfishness isn't nearly as convincing as the whales. [B]
Posted by Chase Kahn at 7:44 PM