Being on a bit of a John Ford kick lately (and re-watching The Searchers again last night), I ran upon this mild anti-Searchers article by Hollywood Elsewhere's Jeff Wells and another by Slate's Stephen Metcalf. 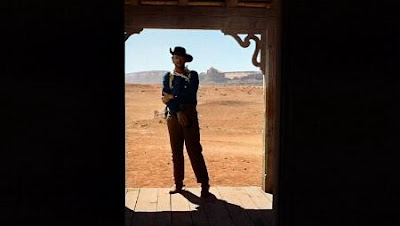 I've never really loved The Searchers ('56) all that much and I just have to roll my eyes every time someone proclaims it as a masterpiece. I love John Wayne's racist, obsessive Ethan Edwards how Monument Valley never looked so good and it undoubtedly has one of the greatest closing shots in the history of American cinema.

Plus, it certainly has a sneaky, ballsy undercurrent of racism and miscegenation, culminating in one of the greatest anti-heroes of all-time (an influence on Travis Bickle), but there are so many hurdles and speed-bumps that I can't sit through it and remotely consider it as a masterwork of its genre - much less one of the greatest American films ever made.

I'm not even close to making a definitive statement on the merits of John Ford as one of the greatest Western directors of all-time, but I certainly found much to chew on in Fort Apache ('48) and consider Stagecoach ('39) to be just a good 'ole fun time. The Man Who Shot Liberty Valance ('62) is a fucking great script and really good film, but Jimmy Stewart is just awful in it and it feels too venerable and stagey at times.
Posted by Chase Kahn at 5:06 PM