The Playlist has been recently tracking the dearth of marketing that Warner Bros. is employing in regards to Jimmy Hayward's Jonah Hex (6.18), the comic-styled Western starring Josh Brolin and Megan Fox.

Up until a few days ago, it appeared certain that Warner Bros. would delay the film, seeing as how with a release date just two months away, no one knew anything about it. Well we finally saw our first footage a couple days ago with a quick promo clip followed by the first official poster today: 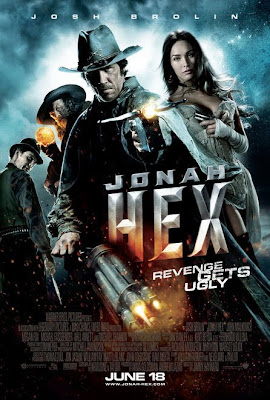 I've never seen a big-budget studio film (much less one with a summer bow), play it this close to the chest. The Playlist - going by early test reviews and script readings - is likening it to Ghost Rider in its mood and style, yeesh. Supposedly the trailer will be attached to A Nightmare of Elm Street starting this Friday.
Posted by Chase Kahn at 2:30 PM