What starts out as a fun, spirited Broadway romantic comedy quickly turns into a grievous, soggy melodrama. William Keighley's No Time For Comedy (1940) takes brooding, ironic missteps during its second half until its paltry 93 minute running-time becomes grating and enduring.

As a piece of history, the film is irresistible, as not only is it the only on-screen pairing of Jimmy Stewart and the delightful Rosalind Russell, but fans of early studio era politics will take notice of the opening Warner Bros. logo that starts the proceedings. 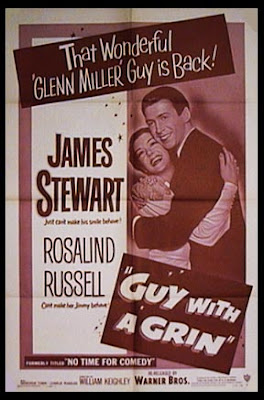 Apparently, as a result of the loan of Olivia de Havilland to MGM to co-star in Gone With the Wind (1939), Warner Bros. was, in return, lent the services of Russell and Stewart (under the guise of stock director William Keighley) to star in No Time for Comedy. (Of his 81 feature films, Stewart only starred in just 6 for Warner Bros. with No Time for Comedy as the first).

In it, Stewart plays a small-town playwright named Gaylord Esterbrook whose debut is picked up as a potential starring vehicle for well-known actress Linda Paige (Rosalind Russell). Upon his arrival to New York, wide-eyed and clumsy, Gaylord's play turns out to be a success and his modesty and big city jitters a turn-on for his leading lady.

After a brief time-lapse montage (in which we see that Gaylord has written a triumvirate of follow-ups), the film becomes dour and drowsy, no longer resembling the zippy screwballer of the first forty minutes. Our once gleeful and unassuming playwright is now burdened by the limitations of his craft, a weakness prayed upon by a conniving socialite (Genevieve Tobin) who tries to pry him away from his Linda (Russell).

In one of many such discussions between husband and wife, Mrs. Russell, surprisingly dramatic for once, pleads that "people are depressed, they want to laugh!" I couldn't have said it better myself, Linda - No Time For Comedy, indeed. [B-]
Posted by Chase Kahn at 12:47 PM