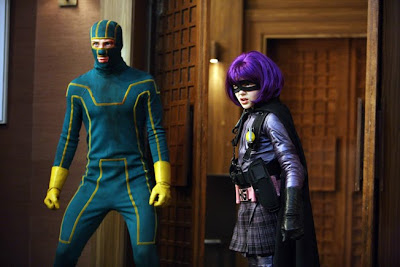 There's a certain amount of joy - elation, even - in watching the tightly-spaced, blade-wielding acrobatics of Hit-Girl (Chloe Moretz), the 11-year old sub-protagonist of Matthew Vaughn's Kick-Ass, a film firmly rooted in the world of comic-strip construction and bodily deconstruction.

But Hit-Girl and her Big Daddy (Nicolas Cage) don't show up much in the first hour, for this film is titled after the typically virginal Dave Lizewski (Aaron Johnson), who dons a skin-tight green-with-yellow-trim scuba suit and calls himself Kick-Ass, fulfilling his and every other comic reader's wish of living in their own world of crime, duality and fame.

What we get is a blatantly self-aware, progressively violent and batty addition to the superhero canon that doesn't so much deconstruct the genre with its "what if" scenario of (mostly) powerless patrons taking up masks and eye-black, but serves as an ambient pop-culture commixture of everything from Tarantino to Danny Boyle to Superbad.

Shot and framed with the vibrancy and transitional approach of a comic-book, Kick-Ass was written concurrently with Mark Millar's ongoing comic series, perhaps avoiding the built-in anticipation and the compromised slavishness that it demands. Kick-Ass is simply at its best when the action is flowing and Ms. Moretz is threatening to stain her purple go-go wig and initialed utility belt, spewing mouthfuls of expletives as she goes.

As Kick-Ass and Hit-Girl team up for some cathartic vindication in the crowd-pleasing, hallway-scrolling finale that would make Neo jealous, the film turns oppressively jubilant like a bazooka to the chest. I'd imagine that it all plays out more favorably within the confines of its native strip panels. [C+]
Posted by Chase Kahn at 7:24 PM