Robert Wise was admittedly not a fan of the western genre before signing on to direct Blood on the Moon ('48) for RKO, a star vehicle for the up and coming Robert Mitchum. Perhaps that's why this border-dispute feels so steeped in film noir and psychological horror, like one of those Val Lewton-produced films that Wise made in the early 40's. 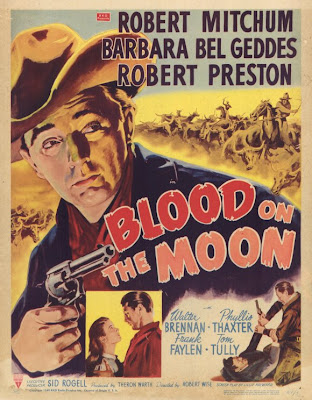 An interesting filmmaker to say the least, Wise began his career as a prestigious editor - working on Orson Welles' Citizen Kane ('41) and The Magnificent Ambersons ('42) for starters - before working his way to the director's chair at RKO. He wouldn't make his mark until later (West Side Story, The Sound of Music, The Sand Pebbles), but his work for the studio throughout the 40's was hardly inconsequential.

Blood on the Moon is the story of a hired-gun, Jim Garry (Mitchum) who finds himself in the middle of a rancher dispute between an insurgent family led by John Luftus (Tom Tully) and the cruel, conniving Tate Riling (Robert Preston). Complicating matters for the initially ambiguous Garry is the tough, deceptively smart daughter of Mr. Luftus, Amy (Barbara Bel Geddes).

It basically amounts to a lean, moderate abbreviation of William Wyler's grandiose The Big Country ('58), differing in its clear interpretation of good and evil. With its radically sparse use of lighting, noirish black & white photography and lone-gun mentality, Blood on the Moon certainly doesn't supply goofy, colorful westward diversion, but in the end, its monochromatic delivery is far more commendable than its adherent formulism. [B]
Posted by Chase Kahn at 2:36 PM