Henry Fonda plays a General Custer starter-kit in John Ford's Fort Apache ('48), the first post-war western by the great American director to flip the script on Native Americans and the way they are portrayed in films. Like The Man Who Shot Liberty Valance ('62) and The Searchers ('56), Fort Apache is an attempt to demythicize the west in the way that it reveals certain truths about our westward expansion throughout the 19th century. 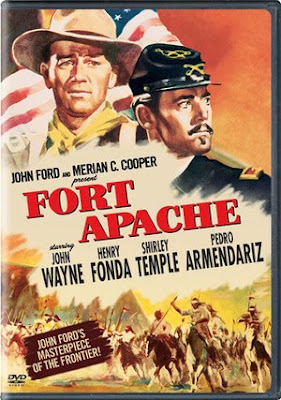 Henry Fonda's Lt. Col. Owen Thursday is a strict, ignorant, stubborn fool. He's a symbol of the past, his naivety towards his enemy clouding his judgment, instead concerned with archaic matters like dress code and organized tactics, confusing the objection to either as cowardice and dishonor.

He is even ignorant to the wishes of his only daughter, Philadelphia (played by a teenage Shirley Temple), who is in love with a fellow Lieutenant (John Agar) and overtly pleads to become a woman - smiling and swooning at the soldiers as they pass by.

When Thursday isn't the center of attention, Ford takes us throughout the fort, expanding on quirky secondary new recruits and the wistful romanticism of Miss Thursday. It's here where Fort Apache feels quaint and frivolous, like outtakes from Wee Willie Winkie.

Nevertheless, the most objectionable officer to the ways of Lt. Col. Thursday is Capt. York, played by John Wayne. Unlike his role as Ethan Edwards in The Searchers, Capt. York understands the Indians and opposes the foolhardy methods employed by Thursday both out in the battlefield (a series of beautiful wide-angle compositions of Utah's Monument Valley) and inside the confines of the fort.

In the climax, which sees a peace-seeking Capt. York adamantly objecting to the trigger-happy Thursday's attack on the Apaches, it becomes a fitting, ironic ending to the short-lived rule of the thick Lt. Colonel.

Back on the fort, with Capt. York in charge (and covering-up for the now erroneously immortalized Thursday), he delivers a reverent, inspired speech about valor and dignity in the honor of those who have died - and with them goes the truth. [A-]
Posted by Chase Kahn at 7:41 AM