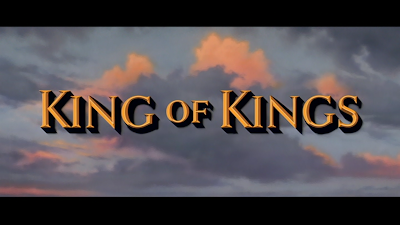 Like William Wyler and Anthony Mann at the end of their highly illustrious careers, Nicholas Ray, one of the most renowned Hollywood auteurs of the 1950's, heavily contributed to the popular uprising of the biblical and/or historical epics of the era, directing King of Kings (1961) and most of 55 Days of Peking (1963) before his death in 1979.

Producer Samuel Bronston, who kicked off large percentage of the epics throughout the 60's with King of Kings, sought a director to tackle a $8 million widescreen remake of the 1927 classic Cecil B. DeMille silent version. As he would later do with Anthony Mann in regards to El Cid (1961) and The Fall of the Roman Empire (1965), Bronston hired on a well-established director on the back-end of their career, bringing in the Cinemascope maestro, Nicholas Ray.

Although the film's reputation has been shaky ever since its moderate returns on opening weekend (and general priggishness from the more stuffy, cynical critics), it's a reasonably effective, albeit simplistic and elementary recreation of the story of Christ, predictably well-fashioned and staged and provides a showcase for the likes of Robert Ryan as John the Baptist, Hurd Hatfield as Pontius Pilate and Brigid Bazlen as Salome.

But what keeps King of Kings from being a tiring, burdensome thing is the way that the narration of Orson Welles and the score of Miklos Rozsa keeps the proceedings in forward-motion, serving as the glue between Ray's handsome biblical reenactments. I would imagine watching the film without them would prove to be a contrarily debilitating viewing experience. 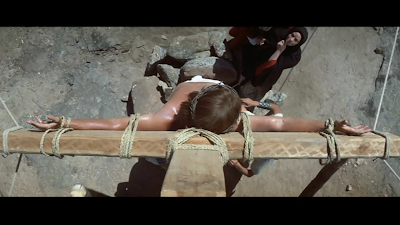 Jeffrey Hunter (The Searchers) plays the titular character, in one of the first times that Jesus was given a face on film. (Most of the time, it was handled in the way that William Wyler's Ben-Hur avoids it.) And Hunter's casting was certainly a hotly contested topic at the time, enticing some to give the film the mock title, I Was a Teenage Jesus.

Hunter's shockingly blue eyes and matinee idol perception didn't help to aid the audiences ability to become immersed into Ray's straight-lipped retelling, but seen through the eyes of a modern viewer, Hunter appears to be relatively believable and appropriately celestial in his delicate movements and line readings. It's not a tremendous performance, but the film doesn't ask for one, it is what it is. [B-]
Posted by Chase Kahn at 12:14 PM